Hindu tradition believes that the entire cosmos is a combination of Shiva and Shakti. Shiva represents tangible matter and Shakti, intangible energy and qualitative aspect associated with matter. Mass and energy are interconvertible. Shiva and Shakti are also deeply interrelated; they cannot be separated. 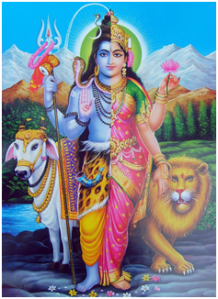 The particle is like Shiva and the charge, spin, mass energy and such parameters are like Shakti. Looking for the Higgs-Boson particle is like looking for Shiva in Shakti — finding the cause of the particle’s mass — when actually they are both just different manifestations of the supreme unity. The supreme knowledge — unification or segregation of Shiva and Shakti — cannot be studied or experimentally verified.It has to be experienced. Ardha-Narishvar form of Shiva-Shakti is the combination of matter and energy with which the universe is formed after inflation and expansion from the Super energy or ADI-SHAKTI.