Initial energy, when started slowing down, a portion of it got converted to matter. According to the accepted cosmological theory holding that Universe along with all matter, energy, space and time began as infinitesimally small, infinitely hot infinitely dense point and temperature. Theoretically it is predicted that there is a weightless particle (called as Higgs Boson) created with the collision which is responsible for the mass of matter. Particles are considered to be points moving through space. The particles known in nature are classified according to their spin into bosons (integer spin) or fermions (odd half integer spin). The former are the ones that carry forces.Ordinary matter is made of atoms, which are in turn made of just three basic components: electrons whirling around a nucleus composed of neutrons and protons.

String theory: An electron is normally considered as a point with no internal structure. A point cannot do anything but move. Under an extremely powerful ‘microscope’ we would realize that the electron is not really a point, but a tiny loop of string. It can oscillate in different ways. If it oscillates a certain way, we see an electron. But if it oscillates some other way, then we call it a photon, or a quark, So, if string theory is correct, the entire world is made of strings! These strings can be closed, like loops, or open, like a hair. The string is free to vibrate, and different vibration modes of the string represent the different particle types.

Thus, Every motion that springs forth from  Absolute is a vibration. Vibrations are oscillating motions around a fixed position. When the infinite vibrates, the worlds are born. When the infinite does not vibrate, the worlds appear to submerge. Vibration is the activity of consciousness, the cause of creation. Each vibration differs only in its tone and rhythm due to greater or lesser degree of force behind it. On the plane of Nada (sound), vibration causes diversity of tone. The vibrations become audible when they are massed together. Nada gives to the consciousness (atman) evidence of its existence.

Subatomic particles electrons etc. always remain in movement in waveforms. Waves symbolises “Nataraja’s dance” in the subatomic microcosm. Sand, rocks, water and air are composed of vibrating molecules and atoms. When cosmic rays fall upon them, they react and destroy each other’s particles. It is a sort of ‘cosmic dance of energy’. Ancient Hindu wisdom depicts it as the Dance of Shiva as Adi Shakti.
It is  ‘Lasya Nritya’ that provide beauty to the matter and ‘Tandav Nritya’ symbolises enormous amount of energy through atomic explosion. Thus unity has been established not only between material and energy but also between material and mystical or Shiv and Shakti. Vibrations turn into atoms and atoms generate what we call life. The soul vibrates, and it creates thoughts. The soul vibrates, and it creates the body. The soul vibrates, and it creates the whole universe.  Everything you see around you is vibrating at one frequency or another. However your frequency is different from other things in the universe. We are in fact living in an ocean of energy. It is The Law of Vibration in action. This energy is supremely intelligent. 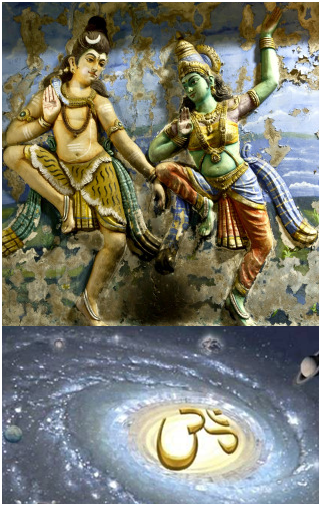 It is the frequency of energy that connects and joins all things together. Sound ‘OM’(ॐ)

comes out of vibration generated from Intelligent Energy. It is ‘Nada Brahma’ or God, the cause of entire creation. This sound Its pronunciation can be divided into three stages.

These three are vocal sounds: A (अ), U(उ), and M(म). It originates with the sound of opening up of the throat beginning at the root of the tongue and terminates with the closing the lips. In between, the sound travels from the throat to the lips in a single breath. The throat sound is A(अ), and M(म) is the lip sound; and the sound U(उ) represents the rolling forward of speech articulation which starts at the root of the tongue, continuing until it ends in the lips.

All sounds within our range of hearing are created by things visible or invisible, striking each other or vibrating together, creating pulsing waves of air molecules which our ears and brain interpret as sound.

Sound that is not made of two things striking together is the sound of primal energy, the sound of the universe itself. In the Sanskrit, this sound is called “Anahata Nada,” the “Unstruck Sound.” Literally, this means “the sound that is not made by two things striking together.” Nada can produce an agreeable or disagreeable effect upon our minds and bodies.

NADA AS CAUSE OF CREATION: In Prashnopishad, ‘OM(ॐ)’-Pranava has been mentioned as controller and life giver of Prana, being the primordial sound created at the time of creation.

It is what is known as Omkara in Sanskrit; the pranava.  In the Vedas it has been said, “pranavatmakam brahmn”. It means: “Brahmn is of the same nature as pranava.’’ When one can hear that pranava, in the next phase one will come in contact with Nirguna Brahmn. That’s why pranava is called pranavatmakam Brahmn.